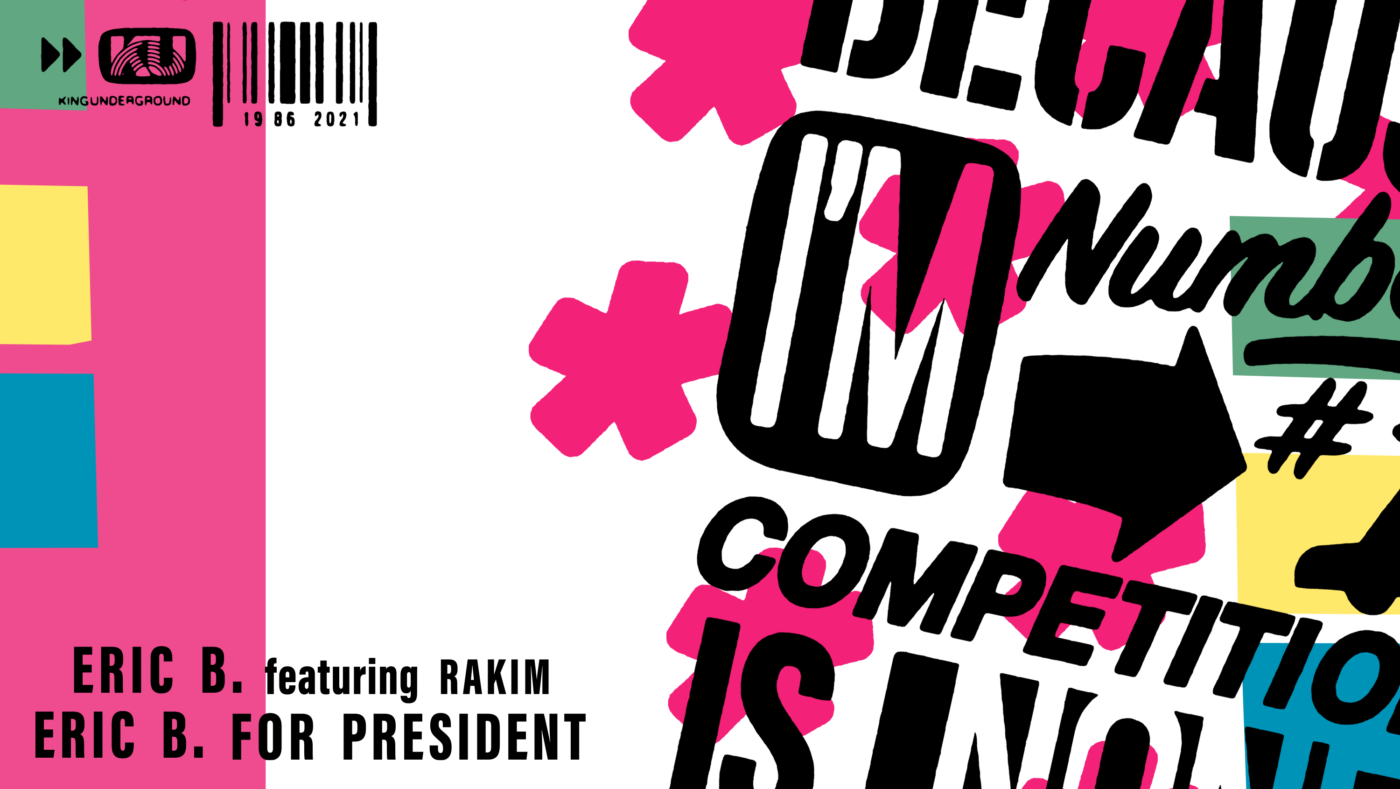 Because I’m No. 1 Competition Is None

Because I’m #1
Competition Is None.

Eric B & Rakim
‘Eric B For President’

Eric B. and Rakim created 4 LPs together between 1987-1992 and in that 5 year period they were able to carve out their reputation as one of the greatest hip-hop duos of all time. “Eric B. Is President” was the world being introduced to Rakim in his rawest form. The rap god was unknowingly laying the foundation for a career that continues on today and is consistently recognised for changing and pushing the boundaries of the hip-hop genre.

Our first-ever 7-inch hip-hop reissue gets special treatment. And, it looks exactly the same as it did in ’86. Now available in new colourways.

With two classic tracks from a monumental record “Paid In Full”.  And a stunning lyric t-shirt designed to pay homage to one of the all-time greats.

It has been no small feat for KU to produce its first-ever major-label licensed replica reissue, but when you have the opportunity to recreate a piece of art involving “The God” Rakim, and producer/DJ, Eric B, there’s no going too far to get it right. The original master files for this record had been lost in the Universal archives, and the masters that were available were for the album versions that appeared on Eric B. & Rakim’s ‘Paid In Full’ (1987). Unfortunately, those versions are 6+ minutes and far too long to cut a 45. This led KU founder and label head to go back to his roots and do some record digging of his own. He was able to find a brand new copy of the original 45 on Discogs, and made the move to purchase it to have a high-quality audio restoration from the vinyl transferred into digital files to then be cut to lacquer. After acquiring the original version of the 45 it was discovered that the versions on the 45 were just the 12” single versions but faded out to make them fit on a 45. It took over a year to sort this all out, which included having Danny Roth Designs recreate the original 4th and Broadway labels, which the major label also no longer had.

Chrome hype sticker on every copy.

The only official re-release since ’86.

Paying homage to the artists that inspired the KU label to exist and carry on is an important piece of the puzzle. This first-ever major-label licenced replica is a monumental note in KU label history. To have an association with an iconic group and song in Hip Hop fandom represents a significant moment and is bound to richen the foundation to come.